Keeping Cool at the Drugstore

It was so hot here yesterday, it hurt to move. My poor cats were laid out like fluffy pancakes on the floor, one of them looked like he was stuck in Dali’s Persistence of Time melting off the windowsill. They stared sadly at me and I thought, “cats are desert animals, they’ll be fine” and I gave them some water and left in pursuit of air conditioning. 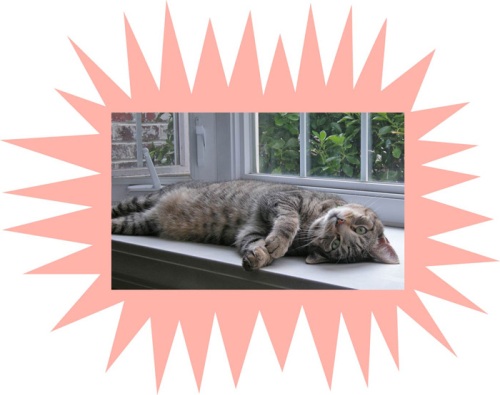 The bank was nice and cold, but after I made my deposit I couldn’t stand around without calling attention to myself, so I headed to one of my favorite places—the drugstore.

I’m usually a CVS girl, mostly because it’s around the corner from where I live. Recently I’ve been thinking they’re slacking with their stock so I wanted to try the new Walgreens which is a whole mile away from me—it’s pure laziness that I haven’t been before. It seemed like the perfect time to try it, unfortunately I wasn’t impressed. I think I’ve become a drugstore snob. When I lived in Manhattan I could go to three different drugstores in a block, and they were always well stocked. Now it seems I can never find anything I’m looking for.

It drives me nuts when I see products in magazines that say things like “$6 in drugstores” because firstly, they’re always more expensive than that, and second, they never stock them. I know I’m a crazy person, but I have gone to dozens of drugstores in pursuit of a product on multiple occasions. When the Sally Hansen nail art pens came out, I went to every drugstore on the lower half of Manhattan, and three drugstores in Brooklyn too. I’m well aware that is a bit obsessive but most of those stores were on my walk home from work, I swear.

Unlike the grocery store which gives me panic attacks, I can waste a whole afternoon in a drug store. The people waiting at the pharmacy usually start to look at you funny, but you just avoid walking past too often. The drugstores in Canada are even better, they have mini department store make-up counters! I bought a whole bunch of Anna Sui cosmetics at a drugstore in Canada last fall, it was so exciting it almost made me want to move to Canada, but it’s way too cold there, I like my temperatures moderate.

I might make a regular feature of drugstore vs. department store makeup.  I play this game with myself where I see if I can replace something I buy at Sephora with something I can get at CVS (usually with a coupon). It’s really satisfying when it works out.

For example, I’m a personal believer that (unless you have allergies or are really sensitive) you should use drugstore mascara. YSL mascara is $30, and CoverGirl Lash Blast is about $8 depending on the store—I happen to get mine in a 3 pack at Costco for $12 which is amazing, but I’ll save that for my “ode to Costco” post. Unless you have a lot of money and don’t mind paying for it, spending that much on mascara is bad also since you should replace it every three months or so, and you’ll feel better doing that if you spend less on it. Seriously though, don’t waste your money. Also, I know they’re scary but an eyelash curler will do more for you than most mascaras will, and they sell them at the drugstore too.

So look out for other posts on comparable drugstore items, I love a bargain and many cosmetics are so overpriced it’s insane. Let’s check out what I got at the store yesterday. 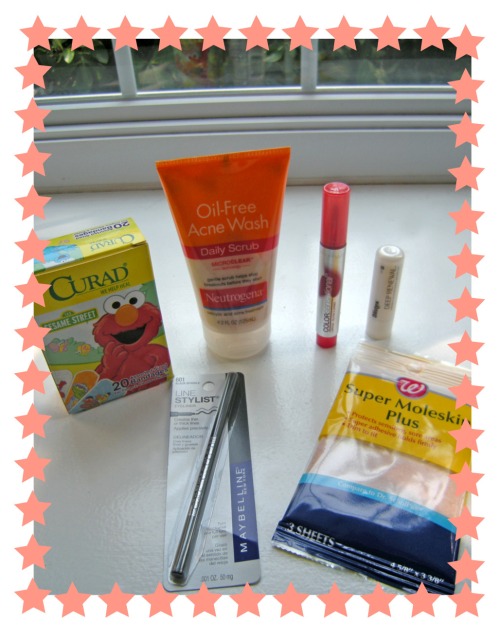 One of the reasons I love drugstores so much is because I have an unhealthy obsession with band-aids. Children often have this same obsession and it seems that I never got over it. The reason kids, and myself, like band-aids is because it’s like a sticker you can wear on your skin! This is why those flesh-colored band-aids will never do. Actually band-aid is a brand, just like Frigidaire, so I guess I’m actually obsessed with bandages, which somehow sounds much more creepy. I even have a little collection with some from Holland, and some from the 80’s and 90’s that they don’t make anymore, alright I know, I’m weird, moving on.

Next is Neutrogena Oil Free Acne Wash Daily Scrub, it’s a re-stock for me, I’ve finally found an exfoliating scrub I really like. It’s not too scrubby and I like the smell, plus it has salicylic acid, and this time of the year with all the sweating, I’m prone to breakouts.

What I really wanted to find yesterday was this Revlon Lipstain, which has a chap-stick on one side and a lipstain on the other.

But of course it’s impossible to find because it only just came out recently. As I’ve done before, I regrettably bought a different lipstain since I couldn’t find the one I wanted.

The Maybelline stain I bought is pretty similar to the CoverGirl lipstains that everyone loves, but I’m not a huge fan of those either, they’re both really drying. I settled and I was disappointed. The packaging deceived me (as it often does) and I thought it might be less stain-y. Boo.

I was also in search of the new Liquiline Blast Eyeliner from CoverGirl that is all over the magazines.

Since they were having a buy one get one 50% sale I bought the Maybelline Line Stylist Eyeliner instead, it’s actually pretty nice, it’s very smudgy and I actually like it so far. I’ll pretend I paid full price for this and got the lip stain for $3.

I love that the Walgreens store brand of moleskin is called “super moleskin plus”, that has got to be some good moleskin. I’m apparently not the only one who needs this stuff in the summer because there was only a pack left in the store. If you don’t know what moleskin is, it may save your feet. It’s flesh-colored (they should really make it in different skin tones) and it comes in sheets so you cut a little piece out and then peel the back off like a sticker and put it on your foot where your shoe is rubbing. Apparently hikers use it a lot, but it’s a very handy thing and can make a pair of shoes much more bearable.

I’ve been looking for this Nivea Lip Care A Kiss Of Protection, SPF 30 since April and I can’t find it anywhere, I’m seriously starting to think someone is playing a trick on me, I can never find it anywhere. I would think it doesn’t really exist, except that my sister has it.

Obviously, they didn’t have this at Walgreens either, in fact they didn’t have any Nivea chap-sticks, so once again I bought a substitute (this is what happens when you spend your afternoon in the drugstore).

It’s pretty good, it’s SPF 15 instead of 30, and it’s not as creamy as the Nivea chap-sticks, but it smells good and is a bit minty.

Am I the only drugstore nut? I think a lot of women spend a lot of time in drugstores, especially on hot days!

I have to apologize if any of this post is incoherent because it’s still so hot here that I’m having trouble forming logical thoughts. The weatherman said it was going to be cooler today, it’s not. I’m praying for it to be lower than 85° tomorrow, my eastern European and Irish blood is not meant for this weather.

I hope the rest of you are staying cool wherever you are!

5 responses to “Keeping Cool at the Drugstore”