My whole life I’ve had people casually say to me “you dye your hair right?” it’s usually more of a statement than a question, whether it’s friends, acquaintances or salespeople shilling products. It’s pretty insulting when people assume a part of you is fake, especially when it’s not, it makes you feel bad, like everyone thinks you’re a poser. People don’t seem to think you can have pale skin and dark hair naturally, maybe because of Dita Von Teese or Elvis. We do exist though, just like natural blonds or redheads, or size zeros, or straight teeth, I promise. Unfortunately in my case (and most of my family’s) that natural color soon finds itself streaked with silver, proving to the skeptics just how natural it is.

I found my first gray hair around age 15. I might have had them earlier, but I was in a punk phase so they were probably camouflaged by purple or blue manic panic.  After I found that first gray hair, bleaching and streaking didn’t seem as appealing. At that moment I decided to enjoy my natural color as long as I could, and then when I went totally white (somewhere around age 30) I would just dye my whole head purple, and I wouldn’t even need the bleach! I’d only just gone through puberty when i started graying, so I wasn’t panicking it was a sign of aging, maybe that’s a blessing. My first thought was actually The Fairy Rebel a book by Lynne Reid Banks, in which there is a girl with 20 blue hairs at the nape of her neck that hold magical fairy powers—if my gray hairs were imbued with magic I wouldn’t mind them so much.

I didn’t take much notice of my gray hairs for a long time, it was only once people started pointing them out to me as if I didn’t know they were there, or like they were shocked by them, that it started to bother me. Especially good was when someone would first ask about my natural color, and then follow it up by saying “oh yeah, you’re going gray already”, yup, thanks for pointing that out. Despite being sick of people’s interest in my grays, or awkwardly telling me how cool they were after putting their foot in their mouth, I was content to keep them until I saw them standing out in pictures, more and more obviously.

What people without gray hair don’t understand is that the color isn’t what is hard to handle, it’s the texture. Gray hair is twice as coarse, so when you go salt and peppery, those gray hairs stick out at funny angles, just to make sure people know they’re there. I eventually got self-conscious about wearing my hair anyway but down, and I stopped wearing a ponytail outside the house because someone would inevitably mention my gray hair to me. There were also the requisite visits by a colorist at every salon I went to whether I wanted them or not (god-bless my current stylist who kept the colorists away from me after the first time I told her I wasn’t interested). If my grays grew in sleek, perfect, contained streaks like Rogue from X-men or Lily Munster, I wouldn’t mind them, but gray hair rarely works that way. Whether the plethora of starlets with ironic gray hair know it or not, gray is harder to manage, harder to make glossy, and can be a general pain in the ass whether you want to cover it up or get it to sit right.

When I realized I didn’t want gray hair in my wedding pictures, I started putting a rinse in my hair. I wanted to look 26 in my photos, and I didn’t want the hairs on my head turning up whiter than my dress. So far I have no regrets, I had a hard time letting go because I worried I was betraying myself somehow. Now whenever someone knowingly tells me “you dye your hair” I  have to say “yes—but only a rinse, and it’s really naturally this color—I swear, I’ll show you my elementary school pictures!”.

Honestly though who gives a crap if I dye my hair or not? Lucille Ball wasn’t a natural redhead, neither is Christina Hendricks from Mad Men, and god knows that natural blonds are as elusive as unicorns—but if they can pull it off, what does it matter if it’s real or not? I always wished I could play with my hair color more, having dark hair makes it hard to experiment, I’m sure I would look natural with my black eyebrows and strawberry blond hair. Whether you dye or not shouldn’t be something you’re ashamed of, but we also shouldn’t assume anyone with a certain hair color dyes it either, we people come in an astonishing number of colors and combinations, there are endless possibilities, and even if it’s obvious that someone dyes their hair, mind you own beeswax, they probably look good!

Maybe one day I’ll let my hair go totally white, and I know when I do I’ll look exactly like Emmylou Harris (dreams can come true). For the time being though, I’m going to put a rinse in my hair each time I notice those little white strands sprouting from my temples again, because I’m just not ready for it yet—maybe after I turn 30, or maybe I’ll have my grand-kids come dye my hair in the nursing home for me, who knows? 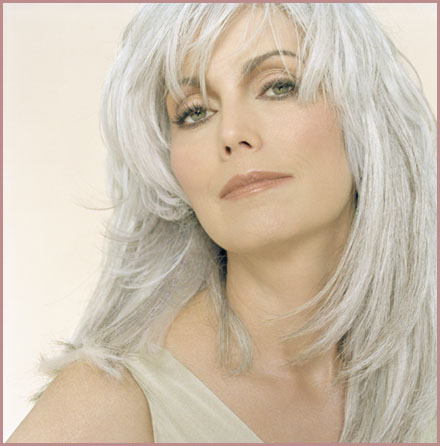 So, what say you readers? Do you dye your hair, do you love your natural color? Hate it? Are you prematurely gray?

Have a great Thanksgiving tomorrow everyone!! Watch the parade, listen to Alice’s Restaurant, tell the people you love how awesome they are, and then eat turkey until you fall asleep—god I love this holiday!